The recent podcast started the discussion around sharing slides. I felt it would be helpful to expand upon some of the ideas in written format. All of this was sparked by a discussion from this tweet and the subsequent discussion.

Is it reasonable to share a tweet of a slide you didn’t like. Yes, in my opinion it is entirely reasonable to share your opinion on a slide you have seen. The presenter has offered this as part of part of their opinion and it is as much part of the discussion as their premise and conclusion. Whilst there is no specific permission given to discuss this on Twitter, discussion whether electronic or in the coffee shop after is equally valid. The discussion is as valid in a positive or negative situation. If, as every presenter hopes, their message is valued, it will be shared in many media. It is unreasonable to expect only positive comment on a presentation.

A presentation once delivered is no longer the property of the presenter. By definition that is its very purpose. The introduction of the speaker, their provenance and even contact details are often part of the introductory or closing slides (for some it is every slide). There is no pretence at anonymity. It is reasonable to comment and share insights from the piece and whether positive or negative. The piece is more than simply the facts; it is the product of the story, the media and its delivery. The opinion of the audience upon this is paramount, not the presenter.

Of course criticism is never easily received, less so if it is unexpected or unwelcome. There is a naivety in some presenters in not understanding that opinion will be shared by their audience on the presentation, a negative impression may however be unexpected. This may be magnified by the discussion around the issue on Twitter (as above) and lead to the presenter feeling vulnerable. This feeling should be taken into account with comments in the same way any tweet does; one must be willing to stand by one’s opinion whether that is generally held or otherwise. The same applies however for the presenter. Their message was neither delivered in a vacuum nor designed solely to stay within the auditorium. The discussion of scientific conferences and social media output surely is already a thing of last year. 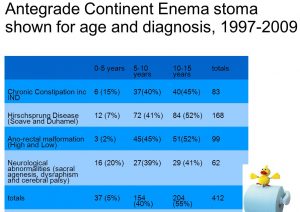 Should comment upon a slide, conclusions, delivery be delivered in an educational way? I don’t believe that is the role of the tweeter, the expectation of the presenter or the purpose of the discussion. Moreover, I suspect few presenters receiving negative comments would be in a place to receive such comment. Direction towards better examples, the science behind the opinion or alternative ideas is noble but unrealistic for many. I would be comfortable for links directing such issues to the website and potentially clearer explanation.

There is a psychological safety built by commenting from behind a keyboard and screen. Very few audience members in receipt of a slide as above would actually take the time to meet the presenter personally and engage in the educational discussion outlined above. This speaks more of unwillingness to engage with difficult discussions and not holding the opinion. However, presenters are often confused by audience “feedback” designating “an excellent presentation” almost as standard before any question is asked. Moreover, the achievement of the same level of mediocrity as seen around them leads many to believe that this is a standard to be lauded. Until clearer examples and understanding are more widespread it is not entirely the fault of presenters believing that such a slide is acceptable and thus even more of a shock to find it negatively critiqued.

Poor presentations are the fault of those who receive them without comment, who coach delivery in a style recognised by many as ineffectual and by continuing to suggest incorrectly that such approaches are “scientific“, “academic” or “professional”. A poor presentation, whether by design, content or delivery shows a lack of respect to the audience, their time and even their employers. So little real value is derived from poor presentations. Those who believe that presentations can and must be improved must set the example, understand the science not fashion behind these improvements and gently show the way for those who would improve themselves. Critique of perceived poor quality is understandable, it is not bullying. Just don’t be a dick.