I have no monopoly on ideas on #presentationskills and so it was with pleasure I accepted this guest post from a friend and educator supreme Anand Swaminathan (known to the world as Swami) . It deals with feedback but principally the difficulty of negative feedback, on a presentation a junior colleague had recently given.

Recently, a friend approached me to discuss some feedback he had gotten after a national level lecture. This was his first large lecture in front of a room of about 300 and he was quite proud of his work afterwards. But when he approached me he appeared crushed. He showed me a list of about 15-20 comments, mostly positive, that were sent to him. Amongst them, there was one that stuck out to him, “the speaker wasted my time.” 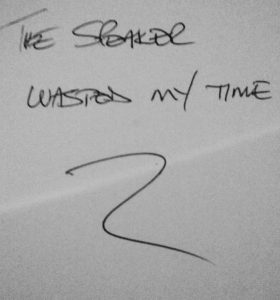 That was it. In 5 words, this attendee had destroyed the self-confidence of a young speaker and crushed his spirit. His question to me was simply, “what do I do now?”

Getting feedback on a talk can be incredibly valuable. It is one of the most effective routes to improving our delivery, content analysis and performance. However, useful feedback must be clear, specific and actionable. Examples that I’ve gotten are, “sometimes your hands are distracting. Can you try to control your movements more?” or “You’re pacing so much I can’t keep you in the camera shot.” Clear, specific and actionable.

Negative feedback, though, is typically fairly worthless at least when it appears as the above comment, “the speaker wasted my time.” There’s nothing here that the speaker can directly take to improve what they do. Was the attendee simply too expert of the content? Did the speaker run over time keeping the disgruntled attendee from coffee or the bathroom? Did the attendee disagree with the content analysis? There’s absolutely no way to know.

First, realize that when you give a talk, someone will always hate what you said and respond in this fashion. The larger the room, the more of these comments you get. Mel Herbert,Professor, Keck School of Medicine of the University of Southern California, told me years ago that if everyone agrees with what you said, you’re not saying anything important. If we are to push the boundaries of knowledge and explore difficult topics, we will get some upset folks. Good on us.

Second, the negative comments will uniformly be overrepresented in the feedback you receive. People who are upset with what you say are far more likely to write a feedback card than those who agree with you and are even more likely to fill out the freehand comments. If you present to 200 people and get 2 negative remarks, there probably aren’t many more than that.

Third, the people who write these comments typically aren’t upset with what you said but rather with something else unrelated to you. They had a fight with their significant other before they came to the conference, their coffee was cold or burned or they skipped breakfast. I find it hard to believe that anyone who has ever created and given a talk, who understands the time and effort that goes into preparing a talk, would ever purposely leave such a malicious remark. Aside to attendees – be kind.

None of this answers the question of “what do I do now?” There’s no easy answer there. A single remark like this is devastating and rationalizing it doesn’t necessarily move you past it. Here’s what I told my friend:

Realize that what you are doing is important and challenging and that may be why you got this response. Keep pushing and don’t stop.

Take the comment as a challenge. Use it to spur you on to improve your skills; not to deviate from your path.

Get tough. You will get this type of response every time you give a talk. It may not look exactly like this but the sentiment and it’s effect on you will be the same. Don’t let your confidence or your will be so greatly affected by one person or one thought.

Foster better feedback. Make your own feedback form that gives you useful information. I distribute index cards and ask people to write down what messages they will take away from the talk.

In the end, It’s unlikely that any of my specific advice made my friend feel better or will make you feel better when this happens. What probably helped the most was simply commiserating; sharing the fact that we all get feedback like this, it’s not about you and to keep your head up and keep doing what you’re doing. The sting ebbs with time but I can’t say it ever goes away completely. We can’t control the responses of others. What we can attempt to control is our response and how deeply this affects us.

Thanks to Swami and his colleague for sharing that. Remember all feedback is valuable depending on how we use it. Don’t let one opinion put you off though ; not everyone agrees on The Best Football Team, loving a new movie or what you chose to wear to the Christmas Party. Opinions vary but reflect the person giving them more than you.