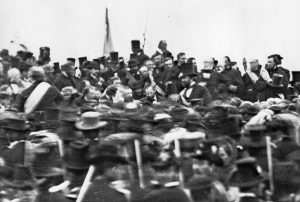 The Gettysburg Address was delivered at the dedication of the Soldiers’ National Cemetery in Gettysburg, Pennsylvania, in memory of the fallen soldiers from the pivotal and bloody civil war battle fought there some four months earlier. The speech had been planned for 3 months, giving its author time to prepare and deliver an epic. The oration was delivered, without a script, over two hours. It composed over 15,000 words, evoked Greek mythology, American culture and various honourable battles. The audience was held in rapture through that time, many reduced to tears, a great presentation. The Gettysburg Address was delivered by Edward Everett. He was followed to the lectern by Abraham Lincoln.

Edward Everett was a renowned orator. His knowledge and insights of classical culture, Socratic structure and elocution had delivered him a reputation across the now United States of America. He was the keynote speaker. The crowd was at The Address to hear Everett. Lincoln, even as President, was not famous for his speeches. In his Gettysburg Address, Everett sought to educate, impress and contextualise the horrors of the war for the American people. An impressive message (p1) memorised and delivered with passion (p3) that captivated and moved the audience, surely a great presentation. Lincoln spoke for less than two minutes.

As a presenter, you may rightly be in awe of speakers on the stage before you. They may have achieved great things, have standing and reputation far beyond that which you believe you can aspire to. They may have wisdom and knowledge and be regarded by many as leaders in their field. The audience may have come principally to hear their piece. You may doubt your value in speaking and see your piece as smaller and less valuable in comparison. You, however, were invited to speak. Lincoln spoke less than three hundred words.

Lincoln spoke for his audience, not to them. He connected with them and gave them a simple message to take back to change their lives. The Gettysburg address changed America, possibly even the world. As a presenter, you may rightly see yourself as of lesser standing and eloquence than some of those on the stage before you. Your piece may be short and simple. Everett wrote to Lincoln in the months following the event saying, “I should be glad if I could flatter myself that I came as near to the central idea of the occasion, in two hours, as you did in two minutes.” The next time you take to the stage, give your Gettysburg Address and change your world.