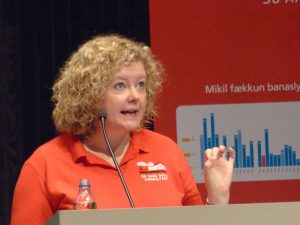 It  is always a pleasure having guest blog posts on the site. This is NOT all about me. I asked a colleague, Linda Dykes, who is a Consultant in Emergency Medicine & General Practitioner in Bangor, North Wales if she would write a few words after some of her presentations, not least following me after this! She has some insights on #presentationskills we can all learn from; some lessons from Linda.

@paramedrusty @ketaminh @keatingteam1 @ffolliet ha,I’ve had the slot straight after Ross too #intimidating but he was v generous w/ feedback

Roll back the clock to April 2016: I’ve arrived in Glasgow, I’m speaking at Retrieval (a gig I’ve always wanted to get to) and I have a flick through the programme… and discover I am speaking right after Ross Fisher. That’s right after as in right after, not so much as a coffee break in between. I do quite a lot of presenting now, both in the UK and abroad. I’m often invited back, I can fill a room and I know I’m generating good feedback. Even with a severe case of Imposter Syndrome, and actually being a bit shy (nobody believes that, but it’s true) I know I’m doing OK, although I am still building my repertoire and experience. But taking the stage (with a hoarse squeaky voice from a badly timed bout of laryngitis) straight after a Proper Presentation Guru is intimidating (sorry, Ross). However, that also means a Proper Presentation Guru has watched my talk. So at the end of the session – and with no voice left at all – I tweeted Ross and cheekily asked whether I could possibly trouble him for some feedback. He was kind enough to respond, guiding me to some useful reflections on my performance, but also making the following suggestions:

1. Make big statements and then explain them, instead of putting your big statement or catchphrase at the end of your explanation.

I’ve moved everything apart from the famous catchphrase in our Mountain Medicine presentations…. It definitely makes presentations feel snappier.

2. What could I simplify? If I had to lose half my slide deck, what would I sacrifice?

This has been scary: I abandoned bullet points and switched to no/minimal text several years ago (the exception being if I’m presenting to an audience whose first language is not English) but I use a lot of images. I made a conscious effort not to do this for a completely new talk I developed for EMS Expo in New Orleans last month. It felt a bit weird, but it helped me have more flexibility in how I delivered the talk gauged to the audience response.

Verdict? I’m not entirely convinced it suits me, so I’ll experiment a bit more before making a decision to stick or twist. I suspect I’ll end up using a few less slides, but not going minimalistic!

3. Why didn’t I look to the left side of the room?

This was a revelation! I’d adopted the trick of making eye contact with a friendly-looking person years ago, but had absolutely no idea that when I’m presenting, I display hemispatial neglect! Easily fixed, but I was never going to recognise this one for myself.

That day that I’d spoken after Ross, he’d finished a few minutes early, so I decided to expand my talk. Ross was less than impressed with that excuse (or perhaps it was because I’d drawn the audience attention to it by asking the session chair if that was ok!).

Since then, I’ve been timing my talks to deliberately finish a few minutes early – and I really, really like it. Nobody minds a talk finishing early, but it irritates everyone to run over. Plus, being right up to time adds to your stress as a presenter. This one’s a keeper.

Looking back over a 2016 autumn conference season that has taken me to Cardiff, New Orleans and Reykjavik, I know that the advice Ross kindly gave me back in late Spring definitely helped me up my game. So, many thanks… and to anyone else speaking straight after a Proper Presentation Guru, why not swallow your fear and try asking for feedback too?

Thank you to Linda for her honesty and the valuable lessons she has shared. Planning a talk to explain the key message is much more valuable than leaving the audience wondering. Less is definitely more when it comes to slides. We need to be aware of our choreography and sometimes a buddy in the audience helps. Good timekeeping is essential and that comes from practise. Feedback is what helps each and every one of us improve. #presentationskills are not innate but need cultivation and reflection.