Once a presenter steps out from behind the lectern there are a whole lots of issues that need to be addressed related to body language. Moving about the stage needs to be purposeful and choreographed. Hands that previously gripped the lectern are now free. Most presenters need to learn what to do with their hands. There is no right answer but definitely a few problems can occur. Think what you are doing with your hands.

The easiest way for a presenter to understand what their hands do whilst a presentation is being delivered is to watch a video of yourself. Any smart phone will do this for you, you don’t need to wait until a big event. Set it up and give at least a five minute talk to camera and use you own remote control. It needs to be that long for you to relax into the piece. Make sure the view is set wide enough to capture your whole body and review the choreography.

Whatever is natural is probably reasonable but it is interesting to reflect on what you actually do rather than how you think you look. Pay close attention and see what happens with your hands as you speak, how do you handle the remote control and how all that fits with the talk. There are lots of variations as there is with movement on stage, a few are discussed below.

Not waving but drowning
Some presenters appear to flailing their arms, purposelessly, as though they are drowning. This expresses energy, often nervous energy, but can become very distracting. 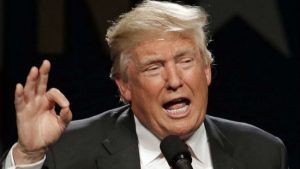 Trump hands
The soon to be president has a habit of using his raised right hand as signalling alternating between the ring OK of thumb and index (this is a good thing) and raised index finger (this is something important). Whether conscious or otherwise it affects how he is perceived.

Some speakers use their hands

or for EMPHASIS. Whilst the latter is reasonable, if EVERY other WORD is EMPHASISED this will TIRE the audience. A variation on this is punching one hand with the other to make emphasis, subconsciously quite violently.

The pointer
There are times when it is valuable to point into the audience. Those should be limited. Remember that many consider a single fingered point quite rude, a two fingered type point appears less so.

The chopper/mixer
The two handed chop of marking and moving on was beloved by Tony Blair and is a variation on the time beater. The single handed version frequently becomes more fluid as a sort of mixing action.

The big clicker
Perhaps a remnant of very old fashioned remote controls that needed a degree of force to depress a button, there is no need when moving a slide forward for the whole the lower arm to be engaged in a whip like motion.

The fiddler
Constantly toying with and probing the remove control. In my TEDx talk i needed a pin to burst my balloon, so I taped it to the remote. I soon discovered how much i fiddled with the remote…

It likely by this point that your level of paranoia will be sufficient to have virtually paralysed you on stage. Which is unfair. Find out if you have any bizarre mannerisms and simply being aware of them will reduce their occurrence. Practise will give you confidence  to reduce this further. Try to keep hands below the level of your elbows and palms facing forwards in an open manner. Express yourself, but don’t dance.