Don’t look at the screen

The reasons a presenter looks at the screen are complex but principally avoidance behaviour. Sadly, many presenters use the slide as a script but this becomes an excuse from engaging visually with the audience. A script is wrong on multiple levels as discussed previously but constant checking will actively increase anxiety, lead to further checking and eventually, even a confident presenter will find themselves fixated on the screen. Never use a script. It is acceptable to use the slides as a prompt but once a cursory glance confirms the correct slide is displayed it is essential that the presenter’s gaze is returned to the audience. The slide will not change without prompting and there is no requirement to constantly check this. To do so is avoidance behaviour. This is often subconscious. 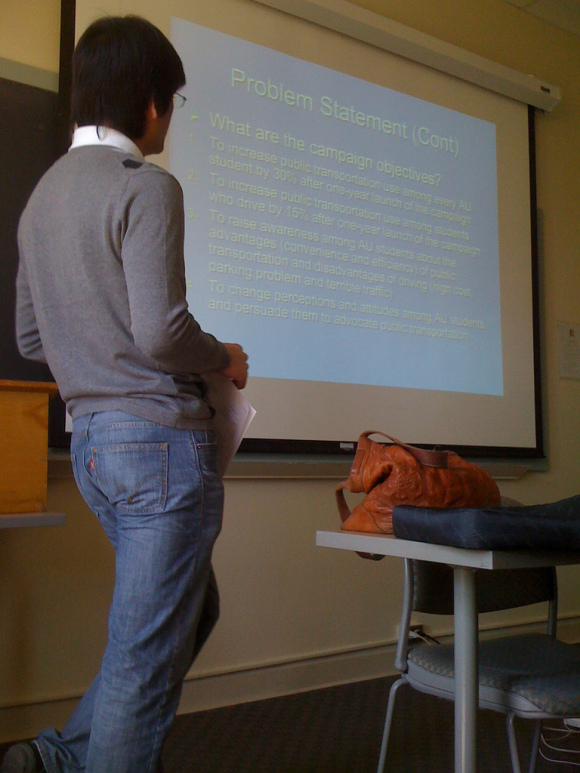 What was written on that slide? The reason you know is the psychological signals given by the presenter direct our gaze to the same object as the presenter. This is of value when a speaker wishes to highlight a specific point on screen but if the speaker’s gaze is constantly at the screen, the audience will disengage from the message. You probably didn’t even see the handbag. As a simple experiment, next time you are in a one to one conversation, for no obvious reason, look sharply over to your left but continue to speak. This will cause your colleague to abruptly look in the same direction. Continue to hold your focus whilst you speak and your colleague will eventually become confused. The audience at a presentation follows the gaze of the presenter, if it only returns to them momentarily they will become confused and disengage from the message.

The voice of a speaker will be poorly heard if they face the screen. This will be particularly bad if the only amplification is a fixed podium microphone; some speakers are effectively muted by turning to face a screen. Even lapel microphones will struggle to pick up speech if the head is turned sufficiently. As few setups have feedback loops, the majority of presenters who make this mistake will be unaware that their insights are lost to the audience. It is important that a speaker faces the audience and not the screen.

The projection screen is for the audience. Most large auditoria have a monitor screen at or near the podium so the speaker can stay front facing. There is no need to verify that the monitor and the main screen are showing the same. This concordance should be clarified at check in and after one slide, no more. The media is supportive and subordinate to the speaker. Don’t let nervousness or a script change that. Don’t look at the screen, look at the audience; they are looking at you.